Food stalls: Even outside the Randstad you see more and more food halls. “They take the place of the club and disco.” 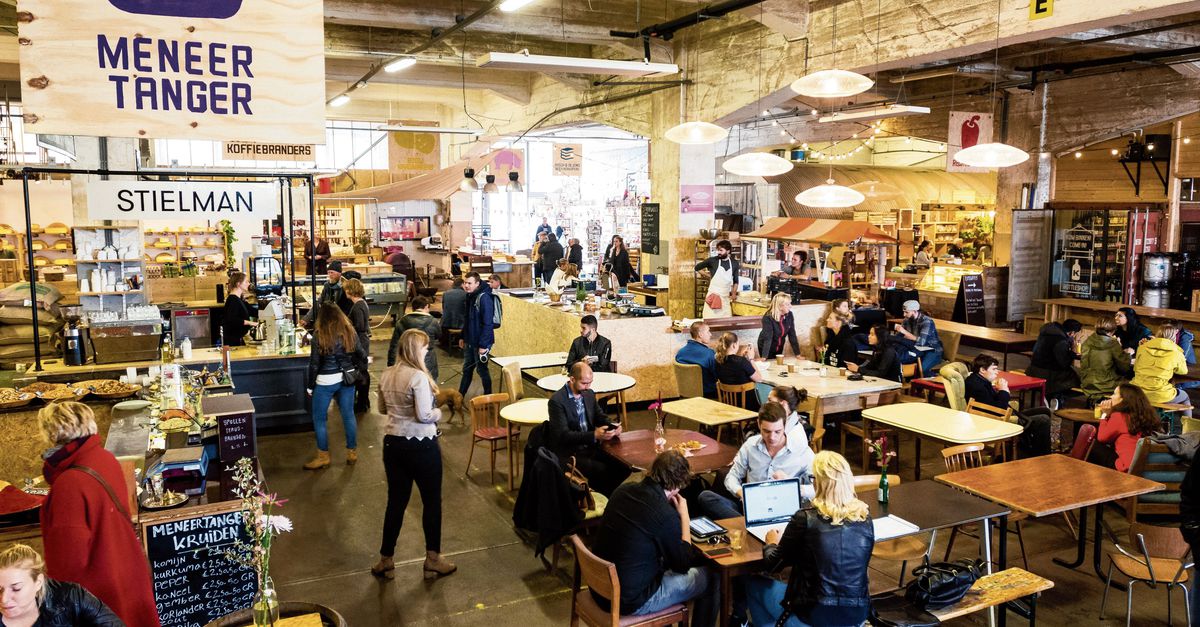 Source: 139 eateries in 9 halls, how the food hall conquers the Netherlands – NRC

It is half past twelve on Wednesday afternoon, and the food hall MingleMush behind Central Station in The Hague is getting busy. Young civil servants, tourists and here and there some older people shuffle past the hip eateries. Will it be Polish pierogies filled with spinach and feta, a Lebanese breakfast with beans and flat bread, a Moroccan tajine of meatballs or a donut filled with crème brûlée? Those who have made a choice look for a place at the tables scattered throughout the hall.

Ayat and Imane, who work at the nearby Ministry of Finance, are waiting for their sushi ritto from the Poké Bar. “It’s sushi, but then like a burrito. Delicious, “says Ayat. “I love food and I come here for the variety. It is more extensive than what you get with us in the canteen. It is also great that many dishes are halal. ”

MingleMush is one of the two new food halls that opened in The Hague last month and it is pretty busy for a weekday afternoon. You see more and more food halls in the Netherlands. The first, simply called the Foodhallen, opened in 2014, in a former tram depot in Amsterdam West. Similar initiatives quickly emerged elsewhere: World of Food and Market 33 in Amsterdam, Fenix ​​Food Factory in Rotterdam and Fooddock in Deventer – the first outside the Randstad. This spring the Down Town Gourmet Market in the city center of Eindhoven opened its doors.

The idea comes from Spain

“The idea came about six years ago, when I ended up in Madrid in the Mercado de San Miguel, an old market hall with a whole series of food stalls,” says catering entrepreneur Zing-Kyn Cheung, one of the initiators of the Foodhallen in Amsterdam. “It was busy there, it was fun and I wondered why such a thing did not yet exist in Amsterdam. I then went to look in Scandinavia and London, where you also have all kinds of food courts. We were inspired by that. ”

To avoid misunderstandings: a food hall is different from a market hall. It is a covered collection of food stalls with at least one common area and one or more bars. Strictly speaking, there are no market stalls where you can buy fruit or vegetables, for example – although you can also buy things at the tents in the Rotterdam Fenix ​​Food Factory. A farmer’s sausage for example, a nice piece of cheese or even a book.

“The success lies in the varied range that makes such a food hall attractive to many different people,” Cheung explains. “You can go with a group of friends and do not have to argue about what you are going to eat. Everyone can choose what he or she likes. And, also very important, it is easily accessible.

“Most visitors are young,” says Bram Kosterink of catering consultancy Spronsen & Partners. He did research into the phenomenon last year. “I’m talking about people over 25, people looking for something new. First they went to clubs or bars to meet each other. Now you can see that the place is slowly being occupied by the food hall. There is music and one or more bars – it is really a night out. Our research shows that 37 percent of people come for the atmosphere. ”

The rise of the covered food market has not yet stopped: there are rumors about a third food hall in The Hague, and this fall one is rising in the former Polaroid factory in Enschede: the Twentsche Foodhal. Old industrial buildings are a sought-after location.